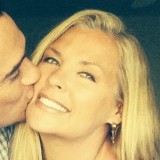 I’m convinced that we are all destined to become our parents some day. Love that your tween wrote up her recipe. And I’m with Amy, I could dive into some of this right now.

Oh my goodness, looks fabulous!!! So easy too. I just brought home a big bag of Macouns from New York state – some of them will have to meet this fate.

that is just screaming for vanilla ice cream! yummmmm.

How fun! Having an apple is suddenly much more appealing now. 🙂

But THIS? This would make me hungry for an apple.

That looks delicious. My mouth is watering. I may have to go pick up some apples on the way home today.

My daughter isn’t even born yet, and I am already turning into my mother. Lord help me. I am SO making this for dessert tonight. Or just a pre-dinner snack.

Sooo good! I will not make the mistake next time to serve without vanilla ice cream 🙂

This looks delicious, and I am going to be making these soon!

I have 3 apple trees, and my kids and I are always looking for new thing to do with apples. They will LOVE this! And I think I will, too! Thanks! 🙂

I have to eat gluten free and this as a dessert makes me forget that!! It’s wonderful. Thank you so much for sharing!

Just stumbled on this recently. I have these apples in the oven and can’t wait to try them. With two small children, I’m always looking for quick dinners, snacks and desserts. This is definitely a dessert that will make them forget that there are apples under there somewhere. And I admit, I’m drooling over it a bit too 🙂

Thanks so much for this! I was making supper for mom (it’s always a disaster, but she pretends to love it) because she was working late again, and I realized almost too late that I forgot a dessert. She has quite a sweet-tooth, so supper would have turned out extra tragic if it wasn’t for this perfectly simple recipe. Thanks again!

I am so happy to have found this recipe! I must’ve done something a bit off though, as the sauce portion didn’t really come together. Any suggestions for next time?

I’m wondering if it might have something to do with the type of apple that you’re using? We use Gala a lot. Perhaps the apple you’ve tried isn’t as juicy? And make sure that the foil it tightly closed to keep all of the steam inside to help create the juices. Hope that helps! Thanks so much for stopping by!!

I just made some baked apples and I didn’t cut them into slices, just core the apple, leave a bottom on the apple, put in the mix of cinnamon and brown sugar(more brown sugar than other ingredients) and nutmeg if you like, and add raisins if you like, all down in the core area. you can add a pat of butter on top. put in a baking dish that has a top. you can microwave for 3.5 to 4 minutes and it comes out delish! just spoon liquid back over the apple when done, The apple is soft and you can cut up and eat. I sometimes add caramel sauce and you can add granola, ice cream etc. so easy and tastes good whether microwaved or oven baked.

In our oven now and we CANNOT wait to try them!

We eat breakfast frequently at Cracker Barrel (so yummy) and they always give a little dish of apples.
This makes me think of how good they are and yes, I too, use Gala, they are so good. I just bought
some, so thanks and now into the oven they go. Will make a batch of them, as my husband has to have his Blue Bell Homemade Vanilla Ice Cream and he will love this. What a surprise he will have.

So yummy! I have been searching for 30 minutes to find a good healthy recipe and this one tops the cake! Thanks for sharing 🙂

[…] a melon scooper to do this if you do not have a corer. For a delicious dessert variation, insert a brown sugar, cinnamon, pecan, raisin and butter mixture into the hollow and bake until tender. The flavors will […]

maaan! youve got me hooked! these apples are to die for! im making them from breakfast and putting them on some pancakes! thanks so much! your kids got some talent there mayum!

Making these for a friend’s (admittedly casual) wedding. Officially the dessert/”cake” is an assortment of cheesecakes, but there are 2 people with dairy allergies and 2 people with celiac disease (gluten-free) going to be there. This recipe is great: allowing me to make something that both of those groups can enjoy. Tried a few variations on a test-run. A mixture of Granny-Smith and gala apples worked well. Also, adding a few drops of vanilla was good. Especially liked the tin-foil idea, makes it easier to travel and clean. (and yes, I have a thermal bag to keep them in until the reception)

I never comment on anything online but this simple recipe deserves it.

Whipped these up in 30 minutes this morning to go with our oatmeal and my 2 year old DEVOURED these!

This is amazing. Thank you.

My boyfriend and I loved it.

I made this last night and was soooooooo yummy!!!!! Thanks for sharing. Only 2 points on WW too for me.

I was looking for some ways to have kitchen creations for activities for senior adult it was wonderful,they were able to do it for them selfs it was a hit!

Awwwwwwww! That is so so sweet! Melts my heart to hear that. Thank you so much for taking the time to share that with me!

Great recipe for us poor college kids! It’s sweet, delicious, cheap, and a great natural source of fiber and energy!

Love this! I was looking for a simple, baked apple recipe and this is easy and delicious. I added a bit of nutmeg and will be making these again for sure!

I made this as a topping for some cinnamon oatmeal pancakes. It was delicious and low calorie! Thanks for sharing!

[…] also have a deconstructed baked apple, as Wendy from Wenderly shows us in this delicious looking recipe. I love the simplicity of the recipe. You also don’t have to worry about the risk of the […]

[…] Cinnamon Apple Bake A warm, fall-flavored dessert doesn’t get better than apples and cinnamon. There’s no need for butter, as the apples cook down just enough to create their own sauce for topping. These individual servings, with a little brown sugar for added sweetness, are sure to be a hit. […]

I love apples and baking and these two combined has become my new favorite especially for winter desserts and quick and delicious snacks. And now very that I’m dieting I’m glad I came across this recipe!!! Less calories… Thank you so much
P.s . I love your name!!!!

[…] a baked apple but was having trouble finding a recipe that didn’t use butter! I ran across Wenderly’s simple brown sugar and cinnamon apple recipe and thought I’d give it a shot. It’s […]

[…] also have a deconstructed baked apple, as Wendy from Wenderly shows us in this delicious looking recipe. I love the simplicity of the recipe. You also don’t have to worry about the risk of the apple […]

I made this quick desert and it was awesome!!

So what's on YOUR mind? Cancel reply