Let me show you how to make pom poms.  Once you see how easy and fun it is, you’ll want to make them all day long!

I can still remember the sound of my mom knitting in the family room. That clink of the two long metal needles meeting and then the slooooow sliding sound that was quickly interrupted by another clink. It was so soothing to hear the curious repetition of the fast and slow movements of her hands and needles. They mysteriously created beautiful ponchos and mittens and hats for my sister and me to wear through the winter months. Matching of course.  I remember trying to mimic her movements with her needles. Crisscrossing them in a dramatic fury thinking that somehow I would magically learn how to make the same beautiful music with them that would eventually turn into a velvety masterpiece. She tried to teach me to knit but I was never able to master the technique. I did however learn to make sweet little yarn pom poms with a round of cardboard. As of late, I’ve been craving an evening project to calm my mind and hands after the long rushed days. I decided to snoop around the internet to remind myself how to make pom poms out of yarn.

Some people still do it the old fashioned way, with cardboard rounds, but I discovered that others use a fork. I gave it a whirl and I must say that I am smitten with the technique. Wait until you see how to make pom poms. It’s easier than pie. Wrap the yarn around the tines of a fork until you’ve achieved the thickness you want. Then thread a piece of yarn through the center tine (below the ball of yarn you’ve woven) and tie the ball of yarn (in half) tightly with a double knot.

Slide the ball of yarn off the fork and cut each looped edge with scissors.

Fluff the pom pom and trim off any uneven pieces. And that’s it! Do you believe how simple it is!?

It was rather fun making different sizes of pom poms with a variety of forks. The tiny little pom pom is just so dear.

I am now hopelessly addicted to the delightfully mindless process of making little yarn snowballs. Even though I’m not making music with metal needles like my mom used to do, I find myself smiling with the same satisfaction of listening to her do so.  I think you will too.

Can’t wait to share what I’ve done with all 432 pom poms I’ve made.

Wishing you many relaxing evenings of making music in your mind whilst making pom poms, 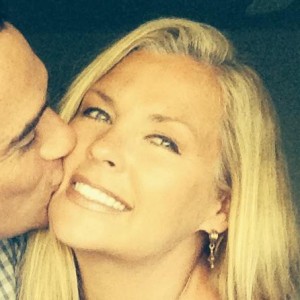